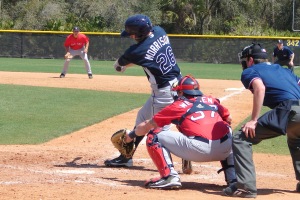 Ty Morrison is a member of the Stone Crabs outfield for 2011.

Morrison was drafted by the Rays in the fourth round of the 2008 draft from Tigard (Oregon) High School. He spent the first two seasons of his professional career with the Princeton Rays in 2008 and 2009. He was promoted to the Bowling Green Hot Rods in 2010 and then the Stone Crabs to start the 2011 season.