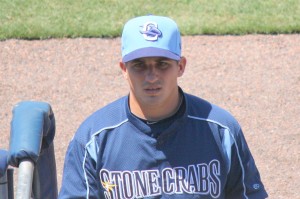 Sergio Espinosa joined the Stone Crabs in late May 2010 after signing a minor league contact with the Rays organization. He appeared in just three games with the Stone Crabs before being promoted to Montgomery. During this time, he was 0-0 with a 1.17 ERA and 5 strikeouts in 7.2 innings pitched.

He rejoined the Stone Crabs to start the 2011 season.

Espinosa joined the organization as a defector from Cuba. He was declared a free agent by Major League Baseball in 2009 and signed contract with the Rays in May 2010. Prior to leaving Cuba, Espinosa held a lifetime 18-15 record with a 3.57 ERA and 17 saves in three seasons in the Cuban National Series.