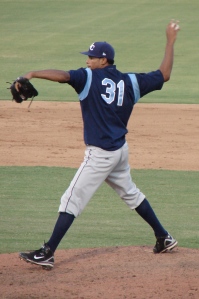 De Los Santos began his professional career with the Cleveland Indians organization in 2001. He joined the Rays organization in 2004 when he was selected by the Rays in the Rule 5 Draft. He spent his first season in the organization split between the Hudson Valley Renegades and Southwest Michigan Devil Rays in 2005. He then was promoted to Visalia Oaks in 2006 and split 2007 with the Montgomery Biscuits and Durham Bulls in 2007. After finishing the 2008 season with Montgomery, De Los Santos underwent elbow surgery in the off season. Richard began his recovery in extended spring training in 2009 before coming of the disabled list and pitching for the Stone Crabs and Hudson Valley during the late portions of the season. Following the season, he received an invite to Rays Spring Training to start 2010 and then split the season between Montgomery and Durham. He became a free agent at the end of the 2010 season but quickly re-signed with the Rays with another invitation to major league spring training for 2011.