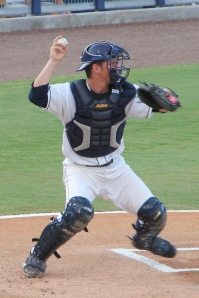 Mike McCormick was one of five catchers that split duties behind the plate for the Stone Crabs in 2009. He appeared in 32 games and hit .170 with 7 doubles, 3 home runs and 8 RBI’s. Defensivly, he threw out 15 of 32 basestealers.

McCormick was drafted by the Devil Rays in the fifth round of the 2005 draft. He spent his first two seasons with the Princeton Devil Rays. In 2007, he was promoted to Hudson Valley Renegades and then in 2008 another promotion sent him to Columbus. He began the 2009 with the Bowling Green Hot Rods until a July promotion sent him to the Stone Crabs.