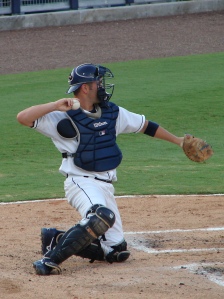 Ian Paxton was part of the catching platoon for the Stone Crabs during the inaugural season in 2009. He joined the Stone Crabs midseason from Montgomery and hit .288 with 4 doubles, 2 home runs and 11 RBI’s in 28 games with the Stone Crabs.

Paxton was signed by the Rays as an undrafted free agent in 2006. He spent his first two seasons with the Hudson Valley Renegades in 2006 and 2007. In 2008, he split time between the Columbus Catfish and the Vero Beach Devil Rays. In 2009 he was promoted to the Montgomery Biscuits but was transferred to the Stone Crabs in June to finish out the season.

In 2010, Paxton began the season in Montgomery but was released by the organization in the first month of the season.