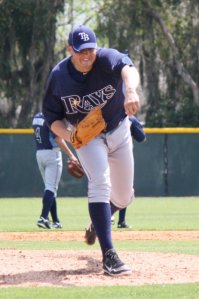 Grayson Garvin was a starting pitcher with the Stone Crabs for the 2012 season. In just his first professional season, Garvin drew the opening day start for the Stone Crabs. He made 11 starts for the Stone Crabs before an elbow injury requiring surgery ended his season early. In his eleven games, he was 2-4 with a 5.05 ERA and 37 strikeouts.

Garvin was drafted by the Rays in the first round of the 2011 draft out of Vanderbilt University.