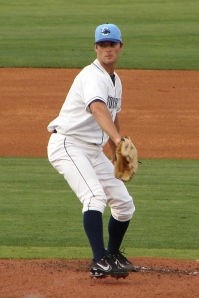 David Newmann made his professional debut as a member of the Stone Crabs starting rotation in 2009. He finished the season with a 9-6 with a 3.44 ERA in 24 starts. He struck out 128 hitters which led the club for the season. Newmann pitched a complete game shut-out on August 29 against the Sarasota Reds in which he struck-out 8 hitters and led him to Florida State League pitcher of the week honors for that week.

Newmann was drafted by the Rays in the fourth round of the 2007 draft out of Texas A&M. A torn ligament in the knee during spring training forced Newmann to miss his entire first season in 2008. He made his pro debut in 2009 with the Stone Crabs.

Newmann was promoted to the Biscuits for 2010.