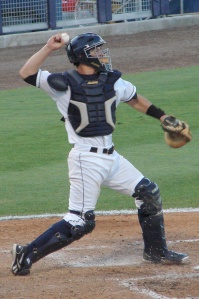 Christian Lopez was one of the many catcher on the Stone Crabs roster in 2009. He played 39 games for the Stone Crabs and hit .174 with 5 double, a home run and 10 RBI’s before his release from the organization in early August.

Lopez was drafted by the Rays in the sixth round of the 2003 draft. He made his debut in 2004 with the Princeton Rays. He was promoted to Southwest Michigan in 2005 where he remained until being promoted to Visalia midway in 2006. In 2007 he split time between Vero Beach and Durham, returning to Vero Beach in 2008 for the entire season.

After his release from the organization in 2009, he spent the remainder of the 2009 season with the Joliet Jackhammers and 2010 with the Southern Maryland Blue Crabs, both of the independent leagues.