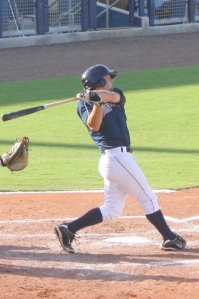 Anthony Scelfo was a versitile member of the 2010 Stone Crabs roster. After spending much of the 2009 season as an outfielder with Bowling Green, Scelfo played around the field for the Stone Crabs, with the majority of his playing time coming at second base. In addition to playing second base, Scelfo also played all three outfield positions and also made one relief apperance on the mound. He hit .240 with 15 double, 4 triple, 4 home runs, 30 RBI’s and 3 stolen bases for the Stone Crabs in 82 games played.

Scelfo rejoined the Stone Crabs to start the 2011 season.

Scelfo was drafted by the Rays in the eighth round of the 2008 draft out of Tulane. He spent the 2008 season with the Hudson Valley Renegades where he was a New York-Penn League All-Star. In 2009, he was promoted to the Bowling Green Hot Rods.