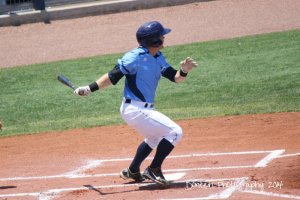 Tommy Coyle double in the first to extend his hitting streak to nine games.

St Lucie jumped out to an early lead in the first inning on a solo home run by Maikis De La Cruz to give them a 1-0 lead.

But the Stone Crabs offense came to life in the first inning by pushing across six runs. Tommy Coyle led off the inning with a double to left. He then scored in a single by Johnny Field to tie the game. Maxx Tissenbaum then cleared the bases with a two run shot to right to give the Stone Crabs the lead. But they weren’t done yet, an RBI triple by Marty Gantt, a ground ball to drive home a run by Granden Goetzman and a RBI triple by Juniel Querecuto gave the Stone Crabs a commanded 6-1 lead.

The Mets collected a pair of runs in the sixth. An RBI double by LJ Maxxilli scored De La Cruz. Maxxilli later scored on a wild pitch to cut the lead in half.

The Stone Crabs bullpen rallied to keep the Mets scoreless through the remainder of the night as the Stone Crabs cruised to a 6-3 win.

Jared Moretensen picked up the win and Zach Copper got the save. Kevin McGowan was the losing pitcher for St Lucie.

The series continues on Tuesday at Charlotte Sports Park. Reinaldo Lopez will get the start for the Stone Crabs.