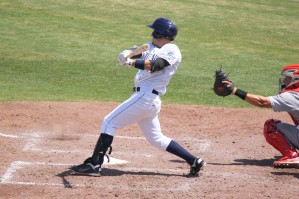 Tyler Bortnick 3 for 4 with a double.

The Stone Crabs were shut-out 5-0 by the Bradenton Marauders on Wednesday night at Charlotte Sports Park.

Bradenton ended the scoreless tie in the top of the fourth inning. Elevys Gonzalez led off the inning with a triple to right field. Gonzalez then scored when Carlos Paulino reached on an error. Cole White then drew a walk to put a second runner on the bases. Both Paulino and White would later score on an RBI double by Kelson Brown to give the Marauders a 3-0 lead.

The Marauders would add two more runs an inning later. Elevys Gonzalez delivered his second triple of the night, this time picking up an RBI in the process as Ramon Cabrera scored on the play. Evan Chambers then drove home Gonzalez to put them ahead 5-0.

The Stone Crabs failed to push across a run in the contest as they suffered the 5-0 loss.

Jake Thompson was charged with the loss. Tyler Waldron was the winning pitcher for Bradenton.

The series wraps up on Thursday night at McKechnie Field. Merrill Kelly will start the finale against Nate Baker for Bradenton.