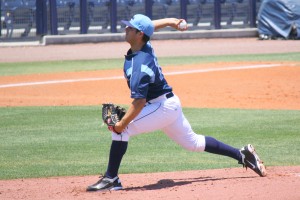 The Stone Crabs picked up their third win in a row by defeating the Clearwater Threshers 5-0 on Friday night at Charlotte Sports Park. The shut-out was the ninth one this season for the Stone Crabs.

The Stone Crabs took the lead in the second inning. Mike Sheridan singled to short to lead off the inning. Sheridan later scored when Anthony Scelfo reached on an error, giving the Stone Crabs a 1-0 lead.

The Stone Crabs added to their lead in the third. Hak-Ju Lee singled on a bunt to lead off the inning. Lee then scored on a sac fly by Brett Nommensen to increase the lead to 2-0.

The Lee/Nommensen connection delivered another run in the fifth inning. This time it was Lee reaching on a double to lead off the inning. Then Nommensen drove him home with a sac fly to up the score to 3-0.

The offense continued to knock out one-run innings with another in the sixth. Tyler Bortnick reached base on a single to center. He then stole second and later scored on a sac fly by Jake Jefferies to give them a 4-0 lead.

The final run of the night came in the seventh inning. Lee once again led off the inning with a hit, this time a single to center. Lee advanced to third on a single by Nommensen and then later scored on a sac fly by Sheridan to give them the 5-0 margin of victory.

Alex Koronis, Matt Stabelfeld and Josh Satow combined to throw the shut-out with Koronis getting the win. Jonathan Pettibone suffered the loss for Clearwater.

The Stone Crabs look for the sweep in the series finale on Saturday at Charlotte Sports Park. Jake Thompson will get the start against Julio Rodriguez for Clearwater.