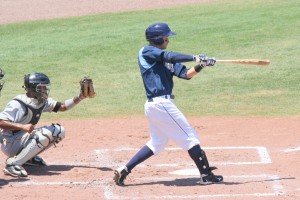 The Stone Crabs were firing on all cylinders as they shut-out the Fort Myers Miracle 6-0 on Saturday night at Hammond Stadium. The offense sparred sixteen hits and six runs while the pitching staff kept them off the scoreboard.

The Stone Crabs took the lead in the second inning. Omar Luna reached on a force out and later scored on a double by Dustin Biell to give them a 1-0 lead.

The Stone Crabs added three more runs in the third. Ty Morrison led off the inning with a single to left. Morrison stole second and then advanced to third on a single by Tyler Bortnick. Jake Jefferies followed with an RBI single to score Morrison and move Bortnick to third. Mike Sheridan plated the second run of the inning with a single to right that scored Bortnick. Jefferies then scored on a ground ball by Anthony Scelfo that increased the lead to 4-0.

The Stone Crabs added two more runs in the sixth inning. Biell doubled to left to lead off the inning. He would score a batter later when Hak-Ju Lee struck a triple to center. Lee later scored on a sac fly by Bortnick to give the Stone Crabs the 6-0 margin of victory.

Merrill Kelly, Mike Jarman and Josh Satow combine to keep the Miracle off the scoreboard with Kelly earning the win. Tom Stuifbergen took the loss for Fort Myers.

The Stone Crabs return home to Charlotte Sports Park to begin a four game set against the Jupiter Hammerheads. Alex Koronis will make the Independence Day start against Rob Rasmussen for Jupiter.