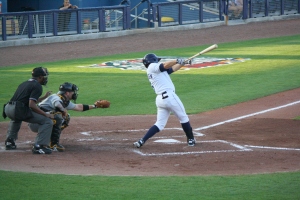 Brett Nommensen had a double and a home run in Thursday's game.

The Stone Crabs could not contain the offense of the Tampa Yankees as they fell 12-2 in the series opener on Thursday night at Charlotte Sports Park. Starter Drew Leary was tagged for six runs. The only Stone Crab pitcher that did not offer up a run to the T-Yanks was catcher Jake Jefferies who pitched a no-hit ninth frame.

Tampa took the lead right from the start, scoring two runs in the first inning. Abraham Almonte reached on an error to lead off the inning. He then scored on an RBI single by Robert Lyerly. Lyerly scored on an RBI double by Kevin Mahoney to give the Yankees a 2-0 lead.

Tampa then pushed across four runs in the fifth inning to distance themselves from the Stone Crabs. Kelvin Castro led off with a single followed by a double by Deangelo Mack. Almonte then drew a walk to load the bases. Walter Ibarra plated the first run of the inning with a sac fly to score Castro. Two more runs crossed the plate on an RBI double by Lyerly. Lyerly would later score on an RBI single by Kevin Mahoney to increase the lead to 6-1.

The Yankees posted another four run inning in the seventh to increase the lead further. In the inning they used five base hits, three of them doubles to extend the lead to 10-1. Ibarra, Mahoney and Mitch Abeita each had a two base hit in the inning while Luke Murton, Mahoney and Abeita picked up the RBI’s.

The Yankees capitalized on four walks in the eighth inning to push across two more runs in the eighth. Zoilo Almonte and Ibarra each drew walks to lead off the inning. Murton then struck a ground rule double to score Almonte and move Ibarra to third. A walk to Abeita loaded the bases. Scott Shuman then issued a bases loaded walk to Taylor Grote to push across another run to increase the lead to 12-1.

The Stone Crabs picked up an additional run in the eighth inning on a solo home run by Brett Nommensen, his third of the year. But it was not enough as the Stone Crabs fell 12-2.

Drew Leary was charged with the loss and is now 0-4 on the year. Sean Black was the winning pitcher for Tampa.

The series continues on Friday at Charlotte Sports Park as Alex Koronis will face Josh Romanski.