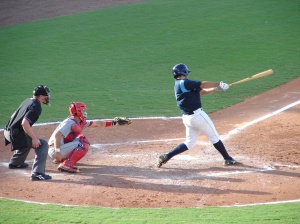 Jake Jefferies drove home the go ahead run in the top of the 11th inning.

The Dunedin Blue Jays came into Sunday’s contest riding a seven game winning streak, but that didn’t intimidate the Stone Crabs as they fought their way to a 5-3 win in extra innings at Florida Auto Exchange Stadium. The Stone Crabs managed to push across not one but two runs in the top of the eleventh inning to help secure the win.

Dunedin took the lead in the bottom of the first inning. Justin Jackson double to center to get things going. Jackson advanced to third on an errant throw on a pick-off attempt and later scored on a sac fly by Kevin Ahrens to give the Blue Jays a 1-0 lead.

The Stone Crabs battled back to take the lead in the third inning. Dustin Biell singled, Hak-Ju Lee reached on a force out and Tyler Bortnick singled to load the bases for the Stone Crabs. Brett Nommensen drove home the first run of the inning with a sac fly to right. Then Greg Sexton plated two more runs with an RBI single to right, scoring Lee and Bortnick to give the Stone Crabs a 3-1 lead.

Dunedin answered with a run in the fourth on a solo home run by Brad Glenn to pull them within a run of the lead 3-2.

The Blue Jays tied the game in the bottom of the sixth. Glenn doubled to right with one out to put a runner in scoring position. Brian Ban Kirk drove home Glenn with an RBI double to tie the game 3-3.

The game would remain tied until the top of the eleventh inning. Mike Sheridan doubled to right to lead off the inning. But he would not remain there long as he was erased from the bases on a fielder’s choice off the bat of Mayo Acosta. With Acosta safe at first, Jake Jefferies then doubled to center to score Acosta for the go ahead run. Chris Murrill would then push across an insurance run with a double that scored Jefferies to give the Stone Crabs a 5-3 lead.

Josh Satow took over the mound and threw a perfect frame, striking out two of the three hitters to nail down the victory 5-3.

Matt Stabelfeld picked up his first FSL victory while Satow recorded his fourth save of the season. Dumas Garcia was charged with the loss.

The series continues Monday night at Florida Auto Exchange Stadium. Merrill Kelly returns to action after a brief stint on the DL as he faces Asher Wojciechowski for Dunedin.